I’ve never been a worrier. I used to pride myself in working through anything that might cause me concern with logic, and I never had a hard time falling asleep due to things swarming around in my head. I was a trusting passenger in the car, even when my high school boyfriend insisted on doing 360’s in his run down pick up truck on closed roads in our small hometown. I don’t remember fear ever having a prominent place in my life.

It’s safe to say, in the past couple of years that has changed.

I don’t know if the fact that I’m getting older, and maybe coincidentally getting wiser, has opened my eyes to the world of worry, or if I’ve lost some of the trust in my livelihood I once had. Sleep seems harder and harder to come by, even though I don’t have any great concerns to speak of. Chock it up to being involved in a pretty bad wreck the week before my wedding, or sliding off the road after hitting ice one cold day in South Dakota, but I am so NOT a trusting passenger anymore. Yet, even though I was cramping so painfully for a week, and had been advised to find an ER if I had another episode, I never worried about what the ultrasound would show.

It wasn’t that I knew for sure there was a baby in there waiting to be seen. On the contrary, it’s hard to believe it’s real when there isn’t much evidence to prove it. But I just knew in my gut, that there wasn’t anything wrong.

The First Ultrasound
Will didn’t realize until the morning of the appointment that he might not be able to make it due to a standing commitment to handling wills for active duty members from 1-3 every Tuesday. When he texted to let me know he was trying to get them rescheduled, my heart sank. Will has always been one of my best and greatest supporters, but for a large part of our relationship we have had to spend time apart, and because of that I have done a lot by myself where others would most definitely have their significant other along for the ride. When we first made the decision to try to get pregnant, we made it knowing that he was going to deploy, and if we did get pregnant, I would be going through the first 5-6 months of the pregnancy alone. I wasn’t thrilled at the concept. I fought it for a while. But eventually I decided that the time after the baby was born was more important than the time it was in my womb, and I would make it work. I can’t tell you how thankful I was when Will’s deployment got canceled and that wasn’t a reality I would have to face. So, at the thought of him not making it to our appointment, when he would be in town, mere minutes away, I felt sick. I wanted him there. I felt like he needed to see the image on the screen so it would be real to him finally. I felt like throwing a tantrum because fathers deserve to be able to be there from the beginning in their children’s lives, just as mothers do.

Thankfully the drama was avoided, because he made it.

It’s kind of funny to take your husband into your Ob-GYN office. A place you usually look towards with so much dread suddenly becomes the place where you get to see your little miracle and it really changes your perspective. Getting into the exam room Will began laughing at all the pictures of sleeping newborns. He has always wanted to make a calendar of full grown men in the awkward positions they place babies for their first photo shoots. The tech came in and started explaining how things would work. Will assumed his position beside the table, and feet in those lovely stirrups, the tech inserted the magic wand and the screen in front of us lit up.

Within seconds the black hole that represented the gestational sac appeared, and then we saw our baby. It was one of the most magnificent moments in my life. Even though you see the positive tests, and feel the symptoms, you can’t help but wonder if it’s all in your head at times. But to see it there, in real life, literally in black and white…it takes your breath away. 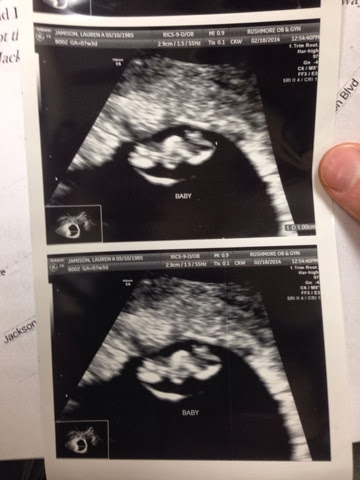 We both looked on in what I can only describe as shock and awe. And then she showed us the heartbeat. We couldn’t hear it because the trans-vaginal ultrasound machine didn’t have that capability, but we were able to see this little white flickering. She read the heart rate which came to a beautiful 139 bpm. I couldn’t help but cry. I’ve spent so much time praying for and about this baby. Please dear Lord let it be healthy, and strong, and happy. And for what we could tell so far, it is.

We were given four of our baby’s very first pictures, and immediately snapped photos on our phones to send to our parents. My sister later asked me if I was relieved, and I realized, not really haha! I don’t know if I will truly be relieved until I am holding a healthy happy baby in my arms…hopefully not for another 7 months or so.

Bumps ahead…but not yet.
I don’t have even a hint of a bump yet, but I figured it’s never to early to start documenting. Please excuse my no makeup and ninja workout outfit 😛 Here I am at 7 weeks and 3 days. According to my pregnancy apps, peanut is about the size of a raspberry. In our appointment he/she measured .39 inches. 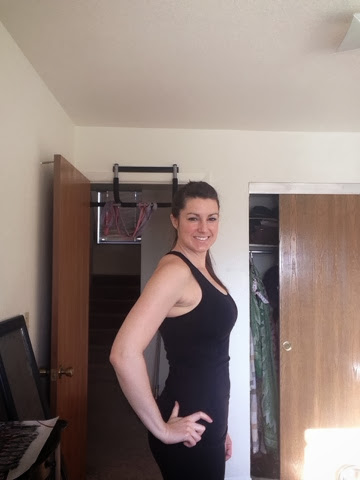 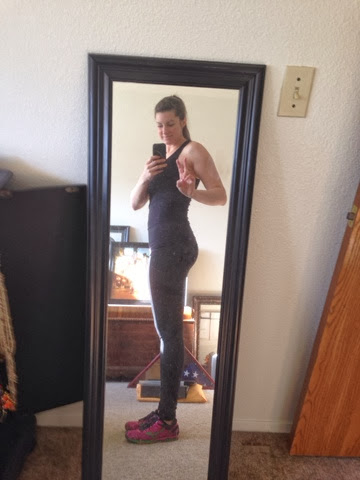 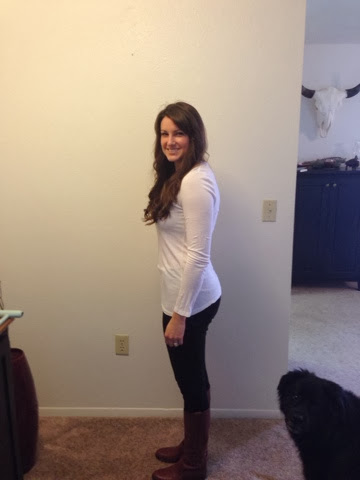 Continued Nausea
This week rounded out with the same old on-going nausea. Except, I actually threw up once. I’m coming to the realization that if I cook the meal, I have a very hard time eating it. Case in point, I fought through cooking some lasagna rolls, only to end up ralphing before they even made it to my plate.
It’s an odd kind of love/hate relationship with food right now. I need to eat to keep from being sick, but eating also makes me sick. The general feeling of poo has become the norm. Will made BEAUTIFUL homemade pitas the other night for our gyro dinner, and while I could stomach the pitas no problem, when they were made into gyros I did good to get about a 1/4 of mine down. Luckily he also made homemade donuts that seemed to do ok going down 🙂
Will has been getting more and more frustrated with my inability to eat. I’m sure seeing his wife, who normally has the appetite equivalent to a 300 lb man, suddenly struggle to put away a toddler’s sized portion of food is a little disconcerting. I can’t blame him for worrying that I’m eating enough to feed our baby, it’s actually pretty cute, but at this point I’m packing it in when and how I can. Saturday I had a good hearty breakfast, a healthy salad for lunch, and then dinner was a no go. Hey, 2 out of 3 ain’t so bad!
Week 8 came to a close with snow blowing outside, and us wishing for a snow day for Will…it didn’t happen, but on to week 9!

0 thoughts on “Week 8: We Finally Saw You Little Peanut!”