It’s kind of hard to believe this week is finally here. Don’t get me wrong, I’m ready in every way for this pregnancy to be over, but I just can’t believe that almost 40 weeks have passed since we saw those two pink lines.

I’ve been told by so many that pregnancy flies by, and now that we’re nearing the end I guess I can agree somewhat. Looking back it’s hard to believe that 9 months have passed. We’ve moved from South Dakota to North Carolina. From North Carolina to Turkey. And now Turkey to Germany temporarily. We’ve donned heavy coats and faced harsh winter storms, sat sweating under the blistering Turkish sun, and now we’re enjoying the beautiful Fall weather in Deutschland. Will has been TDY three times for a total of about 2.5 months. We have taken the bump to see Spearfish (SD – one last time), Staunton (VA), Jamaica (NY),  Adana, Yurmatalik, Karatas, Goreme (all in Turkey), Kaiserslautern, Landstuhl, Trier, and Heidelberg (all in Germany). And Will and I celebrated 5 years of marriage over bratwurst, sauerkraut, and spaetzle at a small German restaurant in downtown Landstuhl.
It’s been a very full 9 months. I’ve lost count of all the miles we’ve traveled. Time has passed by quicker than we’ve realized, but at the same time it’s also felt very long. I guess that’s how time works when you have so much going on. I remember days at the lake this summer where I had absolutely nothing to do but float and relax for days on end. It was an odd sort of boredom because I was content, yet wishing the waiting would be over. It felt like time was standing still, and I was in a holding pattern. Here in Germany there have been quite a few days where I’ve been spent more time laying on the couch than I’m proud to admit, waiting on Will to get here, waiting on the baby to come. Will and I’s life seems to be lived in extremes, and I struggle with the downtime when it does happen. Pregnancy has been a lot of downtime spent waiting…and I’ve realize I’m not very good at that task.
And now I feel more impatient than ever. After this morning’s doctor appointment a nurse called to schedule an ultrasound (providing I don’t give birth first) and was teasing me about us just wanting to see our baby on the 4D screen again. All I could think was how little I cared about another ultrasound. At this point I just want to see the real thing, in my arms, in all it’s squishy, wrinkly, red faced glory.
I never thought of jealousy as an emotion to feel during pregnancy, but I have felt it more than once as the other storknesters have their babies. I’m jealous that they are finally getting to meet their little ones. Jealous that they are finally over the misery of being so hugely pregnant. Jealous that although sleep is a series of cat naps now for them, at least those naps no longer require a carefully positioned fortress of pillows in order to try to catch at least a few moments of comfort.
There are some women who love being pregnant and are sad to see their bumps go. I’m not one of them. I’ve been so lucky to have a great, and easy pregnancy, and for that I am immensely grateful…but I haven’t loved  being pregnant. I haven’t felt like myself for a long time, and I miss it. I’m so grateful I got to have this experience, and now I’m ready for the next step. Pregnancy does a great job of preparing you for the birth in that by the end you don’t care what it takes, you just want it to be over and your baby to be on the outside instead of in. I keep thinking I don’t care how bad the contractions hurt, at least they are temporary and will put an end to the never ending daily pain and misery I’ve been going through in these last few weeks.
Sorry to be so melodramatic. I’m working on limited sleep, a bit frazzled from dealing with the constant back and hip pain I’ve acquired, and admiring my feet that somehow swelled just in the hour’s time we walked to our appointment and back, while the baby is taking another jab at my poor abused right rib cage.
So, now that I’ve done my complaining, here’s where we are. I’ve gained 17.8 lbs. Baby is measuring right on track (give or take a centimeter). Heart rate has stayed in the 140-150’s range. It’s head down, and facing towards the right. We turned down the cervical check until next week’s 40 week appointment so I can’t speak for all the fun dilation, effacement and station stats. I can say the baby has started dropping. The mucus plug is out (sorry for the TMI), and we are truly in the waiting game. My mother had me a few days before my due date, and my sister right on her due date, so I am praying to fall into the same pattern.
Thank you to all of you that have followed along in this crazy journey. I’ve felt your prayers from near and far, and your well wishes and continual support have meant the world to me. It’s such an incredible feeling to know that we are so loved, and that this baby already has so many that love it and are anticipating it’s arrival with such excitement. It has been a crazy, crazy experience and I wouldn’t trade it for the world.
And here is one more bump photo. Let’s hope it’s the last one 🙂 Taken in Trier last week. 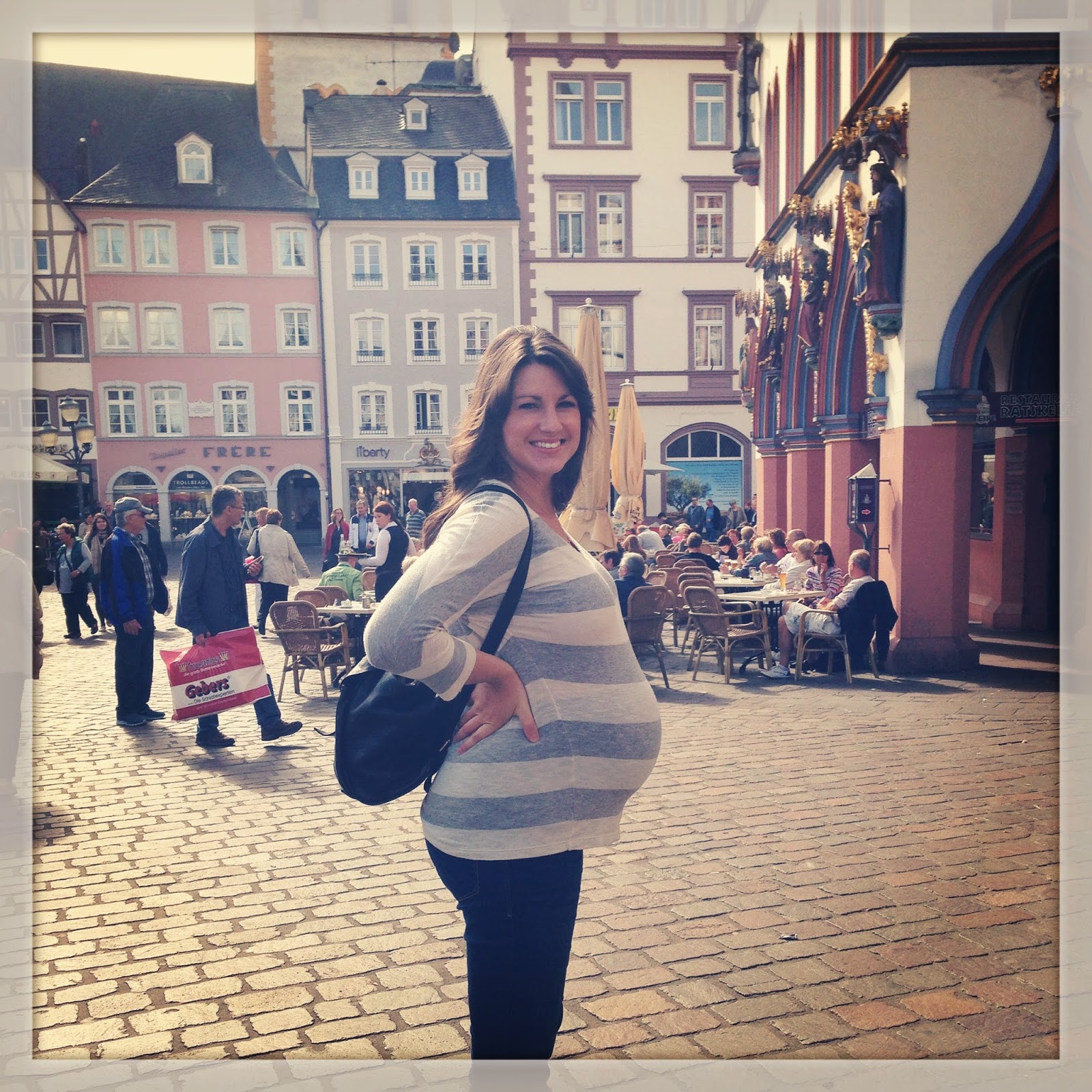