This past week was full of a bit of nonsense. I spent the beginning of the week at the lake with my parents, then drove back to Asheville in time to work on a little DIY crafting project and do a maternity photo shoot session, before heading back to the lake for the weekend.

Putting It In Pictures
I’ve been a little disheartened about my maternity photo shoot, since I had pictured months ago a sort of rustic, boho, campy session, and of course a simple flower crown and some kind of flowing lacy dress. But then everywhere I turned it seemed like people were wearing flower crowns and lace. By the time the shoot rolled around I was less than enthusiastic about the sort of theme I had in mind, but in spite of the fact that the whole flower crown/boho look is beyond overdone at this point, I’m still very happy with how the photos turned out. I can’t tell you how many times I considered just canceling, but I’m thankful to have documentation of this special little miracle. Will and I didn’t do any kind of engagement photos, and outside of a handful (and I mean literally like 4 or 5) photos of the two of us at our wedding, we don’t have any professional photos of our family. Unfortunately he couldn’t make it for the session, but it’s nice to have some photos taken by someone who really knows what they are doing. These are a few of the photos I’ve received in the “sneak peek” from the photographer. I always feel like such a goober when having my picture taken. The “serious face” is my arch nemesis, but Gabrielle did an amazing job of disguising the goober 🙂 I can’t wait to see the rest! 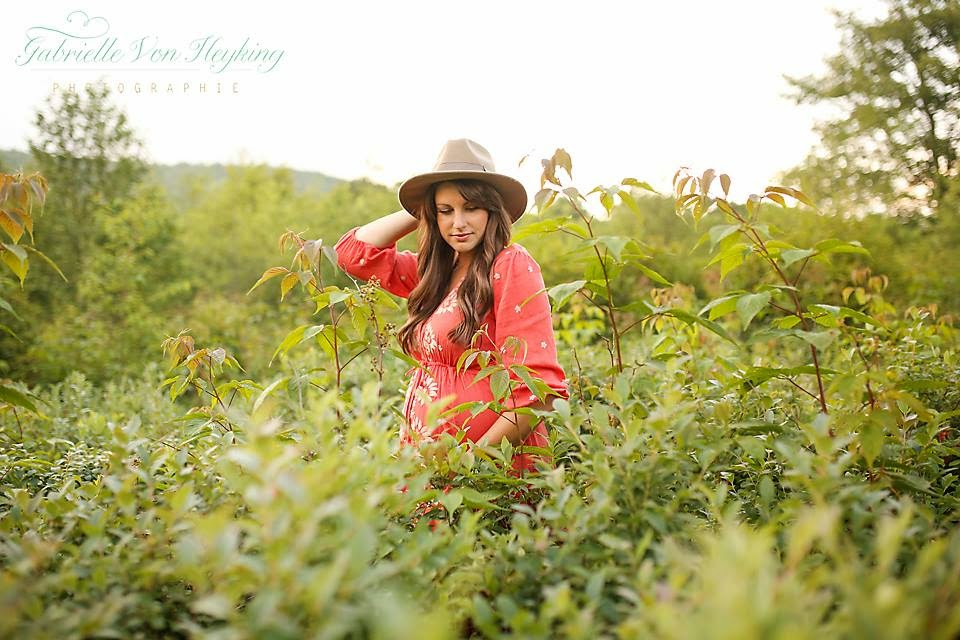 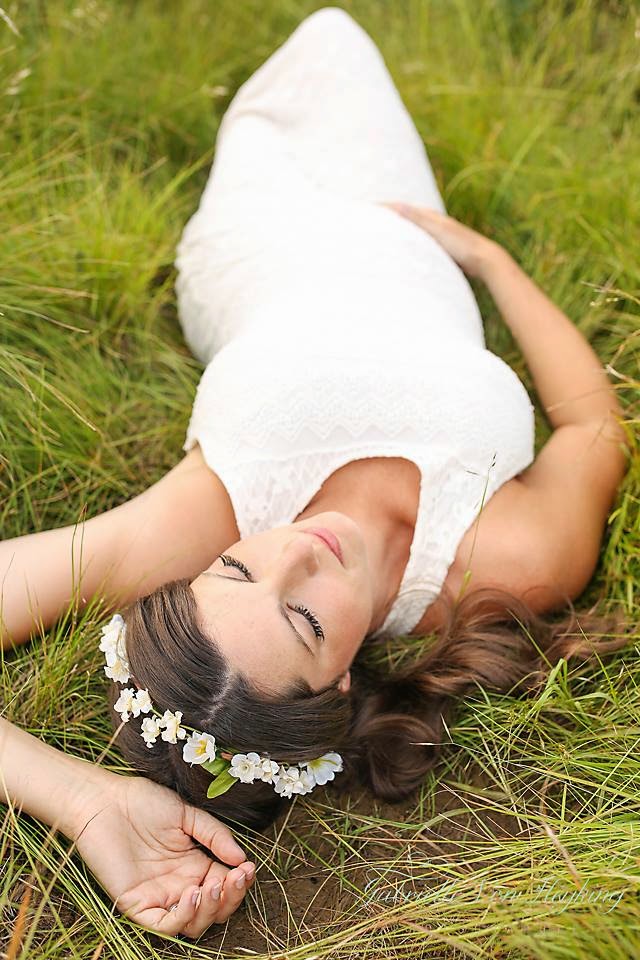 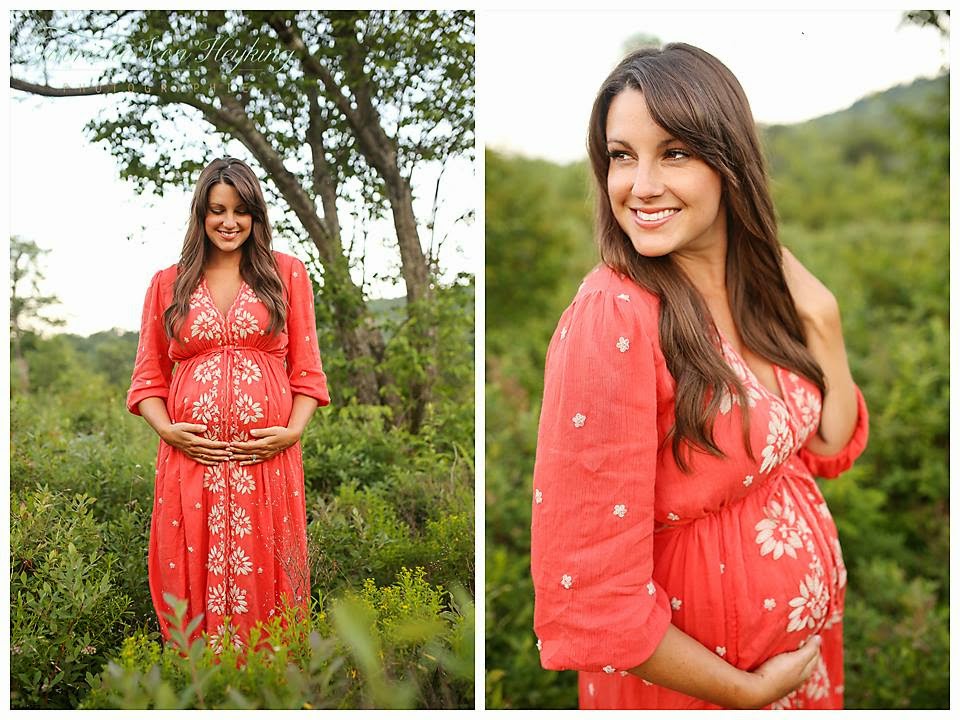 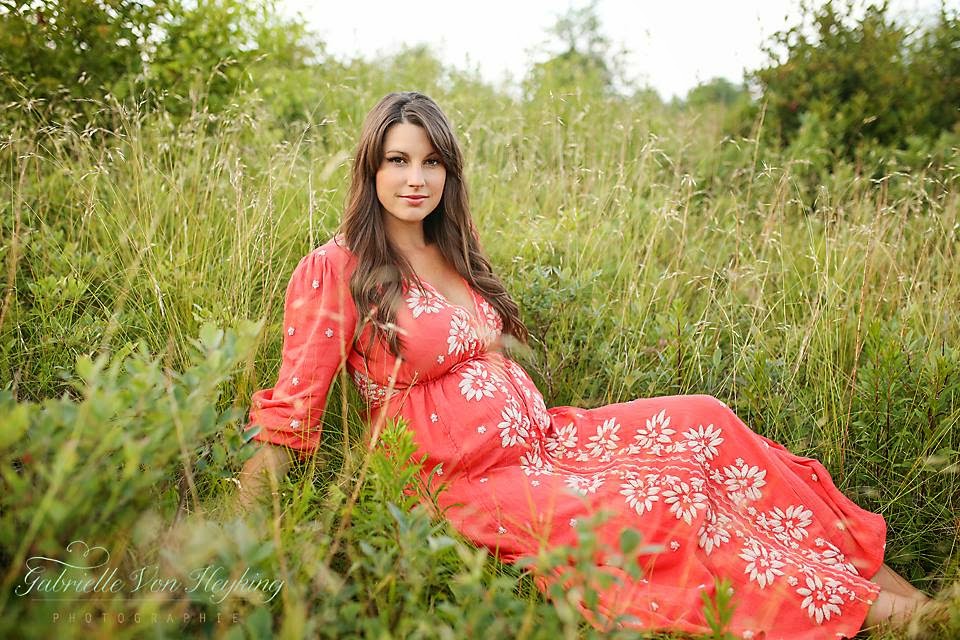 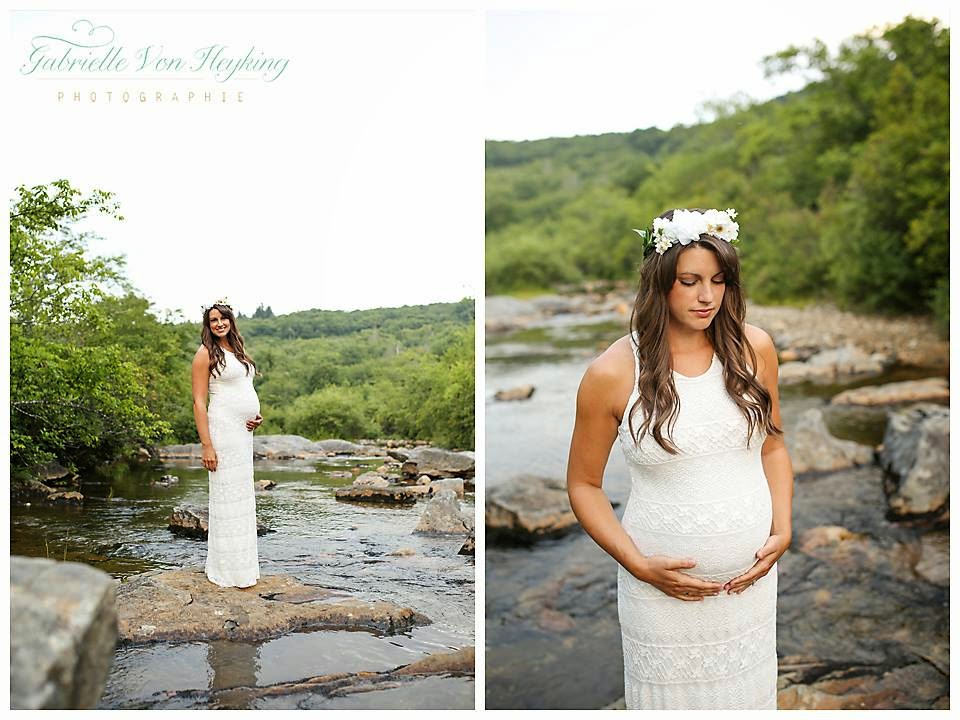 Growing Pains
I haven’t talked much recently about body changes and how I’m feeling in general. Overall I’m still very, very thankful to say that I still feel good. As in, I’m fully functional and don’t feel like pregnancy is just totally wearing me down and making me miserable. With that said, that doesn’t mean I don’t have a few aches and pains. Pretty much daily, from mid-afternoon on, it feels like whatever muscles and ligaments run from my back through the side of my belly are just stretched to the max. Like, I would love to have a belly brace to help hold it up. Mostly this is on the right side, and I think it’s due to my right hip being out of place. I went to the chiropractor a couple of weeks ago for a quick adjustment and confirmed my suspicions that my hips are out of whack, explaining the pain I’ve been feeling.

*On a side note ladies, I also learned that getting at least a few chiropractic adjustments during pregnancy is not only beneficial in regards to helping you feel better, but getting your pelvis and such properly aligned can help line up the birth canal reducing your labor time by up to four hours!

I’m hoping to get at least one more adjustment before we leave for Turkey. I would give anything to have a chiropractor friend that would just adjust my back, hips and neck every day or so!

The Latest Tests
At this last doctor’s appointment I was subjected to a few more tests. Generally at this point in pregnancy you are tested for gestational diabetes, retested for things like HIV and the RH factor, and a test for your hemoglobin level.

Unfortunately my hemoglobin was low (I learned that my mother and my grandmother’s have always been low as well). I wasn’t technically anemic, but I was only off by 0.2 so I was instructed to either take a supplement or focus on increasing my iron intake in my foods. A major side effect of iron supplements is constipation, and not to get into too many details but so far I haven’t had that issue and I wanted to avoid it if possible. So as usual I’ve turned to relying on foods to try to give my iron intake a boost. Today’s lunch was a dark green salad topped with whole oysters. It wasn’t delicious, but I would much rather eat real foods than deal with the consequences of a pill.

I refused the gestational diabetes test. And BEFORE any of you reading get your panties in a wad, let me explain my reasoning. First, contrary to what many (if not all) doctors want you to believe, you have the option to refuse pretty much any test and procedure you don’t want during your pregnancy. There aren’t any laws requiring you to participate in any of the routine checks and tests. However, many of the tests and procedures are done for very good reasons that include making sure you and baby are healthy, and that anything preventable is taken care of along the way.

For the most part I’ve been fine with everything I’ve been asked to do, but when it came to gestational diabetes I just really felt it was unnecessary. Based on the risk factors, I was considered very low risk. But my reasoning didn’t end there. Our main objective it to have a natural (drug free) birth. In order for us to be given that chance, I need to remain as low risk as possible. The GD test is based off of a blood test measuring your body’s reaction to a sugary drink (that just so happens to be FILLED with disgusting and terrible ingredients). Not only is the scenario in which the test is administered not representative of a typical meal or real-life situation (most people don’t fast then sit down and eat spoonfuls of sugar), but often times women receive a false positive result (this happens even more frequently in women who typically eat a clean, low sugar diet), which then leads them to have to endure a longer 3 hour test to determine if they really do, in fact, have gestational diabetes. About 15-23% of women receive a positive on the first test, but only a third of those women are actually diagnosed with GD. All in all, only 2-5% of expectant mothers actually develop gestational diabetes.

While this may seem harmless, a false positive result can cause you to be labeled as a higher risk pregnancy, setting you up for more medical interventions and an even harder fight to have a natural birth.

Beyond that, in most cases, even if you are diagnosed with gestational diabetes, it is usually managed by diet and exercise. Only in rare cases are insulin treatments needed. I felt like I already make it a priority to eat healthy, and being diagnosed would not really change how I approach my nutrition.

And lastly, and possibly the most important, when I researched how gestational diabetes affects babies, I learned that the effects are minimal, and all easily treatable. These include macrosomia (a large baby) which could result in the need for a c-section (although it is very common for women to give birth to 9-11 lb babies completely naturally), hypoglycemia (low blood sugar generally corrected by breastfeeding upon birth), jaundice, respiratory distress syndrome (in which case they will be given oxygen at birth), and low calcium or magnesium which can be treated with supplements if severe enough to warrant it.

So I said no, and I do not regret it. I did a lot of research and talked extensively with my Bradley instructor and Will before making this decision. Surprisingly my doctor agreed that I was low risk and didn’t give me much grief about it. She appreciated that I had done my research and had valid reasons for refusing the test. Everyone has to make a decision for themselves and their body and baby, and I feel confident in this decision for us. My advice always is to research, research, research and ask lots of questions…then do what feels right and comfortable for you.

Feeling That Precious Little Body
The newest experience I’ve had was feeling Baby J’s little body. I was driving home from the lake and happened to rub my hand along my stomach and felt this hard little mass nestled against my belly to the right of my belly button. It’s the first time I have been able to feel something solid in there and it was pretty amazing. It didn’t care for my poking and prodding and moved away pretty quickly, but it was definitely another step in making this all feel that much more real. It’s been much harder than I anticipated to feel connected to the baby, and to accept that there is a real human being in there. I’m happy to say that each day as the kicks and rolls are more pronounced, and now that I’ve actually felt a little body, it’s becoming easier to think of the baby as a person. I’m dying to get to know it’s personality, to see what a combination and myself and Will will look like, and to experience the change in the dynamic of our little family. For so long you think of it as just a baby, and then you realize that it’s actually another soul, a new member of your clan, and a whole other personality that is joining your family. That is a really exciting thing to think about. It’s like waiting to meet a new friend 🙂