This week started with a lovely migraine. This makes number 3 since finding out we were pregnant. I thought my head was going to explode. I was seconds from calling the doctor when the pain finally broke and I was able to rest just a bit. The throbbing continued but at a more bearable rate thankfully. I did break down and take some tylenol. After reading more and more about the effects of drugs, even the ones deemed safe for baby, I’m feeling more and more strongly about not taking anything during my pregnancy. But I’ll be honest, in the throws of the pain that day, I felt taking some tylenol was less traumatic for the baby versus it having to deal with the stress of the pain I was feeling. Although I think I was at the peak of the pain and if I would have just held out another couple of minutes I might have made it through. Man I hate migraines!

Tiny Flutters
Most women don’t feel their baby move until around week 16 in their pregnancy, but if I didn’t know better I would swear I’ve felt our baby move here and there. At this point it is definitely kicking and moving around, it’s just usually too small for the mother to feel. It may be my “sensitive uterus” but every now and then I feel little flutters in there. I can’t say for sure it’s the baby moving, but I like to think it is.

Hearing the Heartbeat for the First Time
We weren’t sure if the doctor would try to find the heartbeat at this appointment. Many times 11 weeks and 2 days is just too early to hear it, and anxious mothers freak out if their tiny baby doesn’t perform. So with that in mind, and due to Will’s work schedule he didn’t attend this check up. After explaining to the nurse about our move (I think the whole office knows now), and the short timeline we are on to furnish the nursery, and the fact that we haven’t officially announced yet because we wanted the assurance of hearing the heartbeat, she promptly sent in the tech that handles the doppler.

This time I was allowed to record. I’ll admit I was a little distracted by her moving the wand around in the gel, and listening, and hoping I hit record when I was supposed to that my reaction to that tiny, fast-paced little heartbeat was not how I had expected to react. I think I simply jerked my head up and smiled catching the tech’s reassuring smile in return. Every time I go to the doctor I’m secretly amazed that there is a baby in there. I’ve got no bump to speak of, and as of today I’ve not gained a single pound. That tiny heartbeat was the best thing I’ve heard to date.

The tech said our little one was a mover because every time she would find the heartbeat, the baby would move and she would have to search again. Finally she found it and got it to hold steady long enough to record.

I sent the video to all of our family and of course to Will. A strong 170 bmp, and an active little peanut!
Something I didn’t expect to find out during the appointment, was that one of the blood tests I had done back at my very first 6 week appointment (called the Harmony test at my office) had already determined our baby’s gender. The test is made to look for things like down’s syndrome and trisomy, but as a result of analyzing the chromosomes, it also determines the gender with something like a 99.5+% accuracy. I quickly told the nurse we didn’t want to know the gender, but man was it hard knowing the answer was right there on that piece of paper in front of me. I’m glad we aren’t finding out, but I never said it would be easy haha!
First Purchases
We had been holding out buying anything until we felt more sure that we were going to make it past the first trimester. I know it’s a sort of morbid way to think, but so many many things can go wrong. We had decided providing this appointment went well we would go ahead and start ordering things, and make it Facebook official.
I ended up finding a Medela breast pump tote, brand new and never used on Craigslist. Including a set of bottles and extra accessories. I made out like a bandit saving over $100! I picked it up shortly after the appointment making it the very first thing I bought for the baby, well except for some maps Will and I had been collecting to decorate the nursery.
I had to meet a friend who I help with her business, and she just so happened to be at Target. I just couldn’t help myself, I HAD to peruse the baby aisles. I decided that if anything was a decent price there from our registry I would go head and buy it. Our family has so graciously taken care of buying the furniture and our stroller and car seat, so we decided we would buy anything other bulky things that I wouldn’t be able to fly over in my luggage.
Unfortunately the only thing I found at Target was a Johnny Jumparoo, but it was still exciting. Right now our Amazon cart is sitting full and I’m ready to click the place order button!
Gender Prediction Tests
There are a million old wives tales about how to predict gender. Bad morning sickness means a girl, a lower than 130 heartbeat means boy, etc… None of them are really accurate ways to predict the gender of course, but sometimes it’s fun just to play along.
Chinese Gender Predictor – There are two different Chinese gender predictor calendars out there, one determined by your Chinese lunar age at time of conception, and the lunar month you conceived, and one just done by your regular age and month of conception. According to the lunar age and month we’re having a girl, according to my regular age and month we’re having a boy.
Ring on a String Test – Supposedly you can dangle your wedding ring from a string (or in my case a thin chain necklace) over your belly and if it swings back and forth you are having a boy, in a circle means a girl. According to my ring we are having a boy.
Cravings – If you crave sweets = girl, salty = boy. I have told Will multiple times this is definitely his baby because I have inherited his insatiable sweet tooth. Ice cream, pies, and cookies oh my! Girl!
Morning Sickness – Acne could be thrown in with this one as well. It’s said girls suck the beauty out of their moms, blessing them with terrible morning sickness, and acne. While boys give mamas-to-be that beautiful pregnancy glow. This one is kind of a toss up for me. Compared to the many women who spend much of their first trimester (and sometimes the 2nd and 3rd) snuggled up to the porcelain throne, my slight bit of nausea and food aversions was a cake walk, but I did still have it for a few weeks. As far as acne, I’m not sure my face has been totally clear since the week before I tested positive, but it’s not like I’ve taken on the nickname “pizza face” either. So I’m deeming this one inconclusive.
Mayan Even or Odd Test – Legend has it that the Mayans determined a baby’s sex by looking at the mother’s age at conception and the year of conception. If both are even or odd, it’s a girl. If one’s even and one’s odd, it’s a boy. I was 28 when we conceived and it was in 2014 = girl.
Heartbeat – Many say if the baby’s heart beat is above 140 it’s a girl, below it’s a boy. At our ultrasound the heartbeat was 139 bpm, at this weeks appointment it was 170 bpm. I’ve also read that if the baby is active (which ours was) it will be higher just due to the movement. So again, at least for now, this is inconclusive.
So basically, only God (and the nurse that read my blood test results) knows what we’re having haha!
Still Bump-less
Over the weekend we went to see Divergent (which was awesome!), and Sunday Will went skiing with one of his coworkers while his spouse and I, and their baby Teddy (Theodore Boone, seriously the best name ever!) hung out in the lodge. Nothing too exciting but some good girl time chit chat, which I’ve learned is a precious thing to come by since we’ve moved. I did make sure to snap my belly bump pic with all the snow at the ski area. I keep hoping the snow is on it’s way out, but alas, it’s in the forecast for tomorrow again. Anyway, here I am at 11 wks + 6 d. 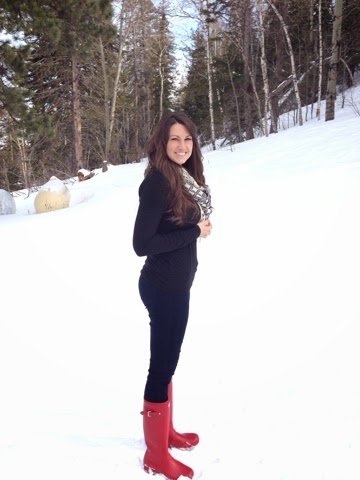